Homepage FatihFatihSelatin Mosques In Fatih
-A A+

The mosque at Bayezid neighborhood was ordered to be built by Sultan Bayezid the 2nd. According to the epitaph on its main door written by Sheikh Hamdullah, it was constructed in five years between 1501-1506. Evliya Çelebi is quoted to describe that on the opening day of the mosque the first prayer was leaded by the sultan himself.

Architect Kemaleddin and Architect Hayreddin were first thought to be architects of the mosque while in the following years based on a new source, Yakub Şah b. Sultan Şah was presented as the architect of the mosque.

It is accepted as the oldest selâtin mosque to keep its original structure in Istanbul. Tomb of Sultan Bayezid the 2nd is at the burial area of the mosque.

It was the second biggest selâtin mosque that was built after conquest of Istanbul. Its main dome with 16.78m diameter was built on four pillars and was supported with two half domes in North and South. Its main dome has twenty and half domes have seven windows each.

The mosque has a square-shaped narthex surrounded with a 24-dome portico. The courtyard floor is marbled and has a fountain at the center. 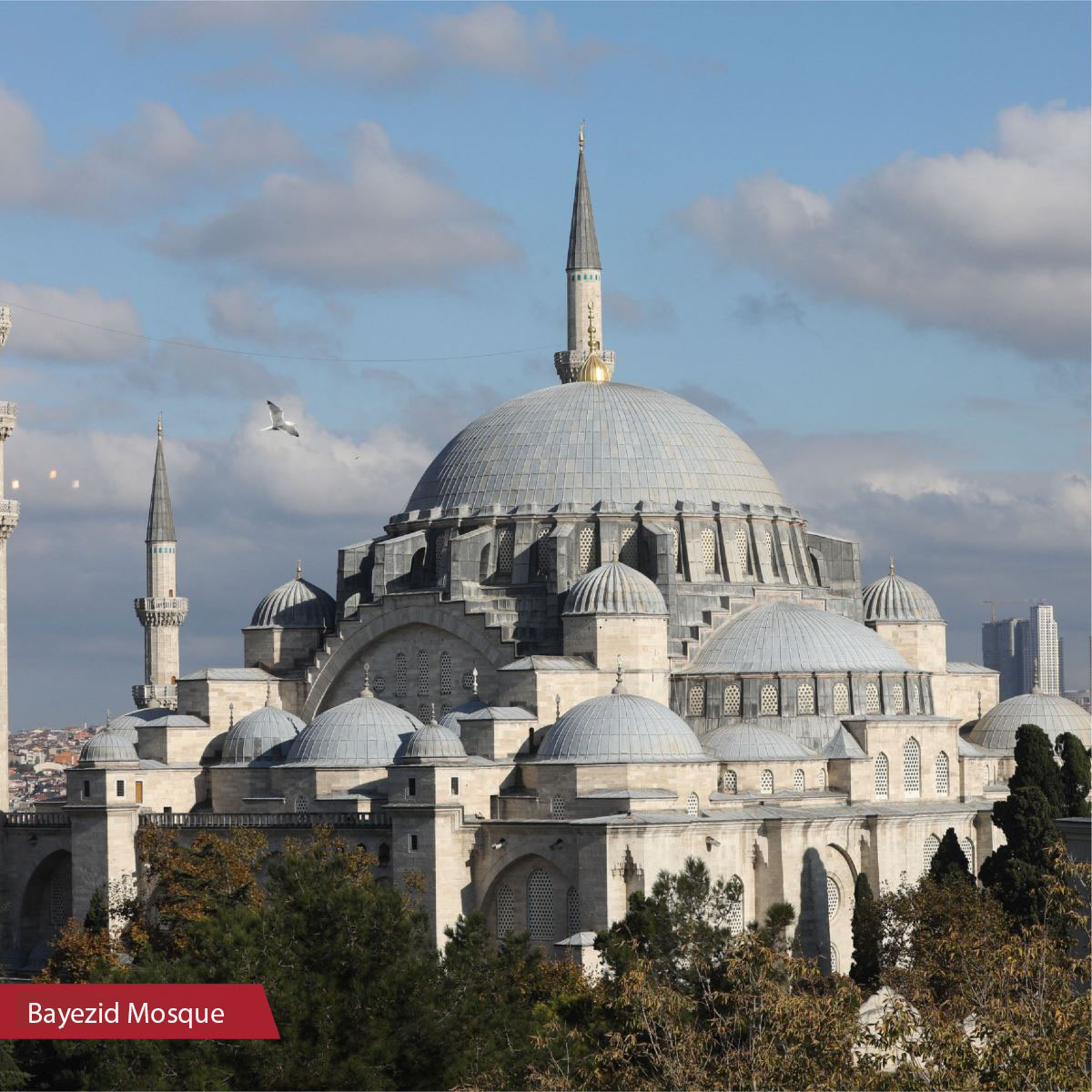 This is the mosque and complex ordered to be built at Fatih district of İstanbul. There are 16 Muslim madrasahs, a hospital, a guesthouse, a soup kitchen, a library, and a turkish bath in the complex. It was built on one of the seven hills of the city.

Its construction was started in 1462 and completed in 1469. Its architect is Sinaüddin Yusuf bin Abdullah (Sinan the Agile). From the original state of the mosque only three walls of fountain courtyard, fountain, crown gate, altar, minarets up to the first balcony and a part of the surrounding wall are standing.

At fountain courtyard, the stoa parallel to the Mecca wall is higher than the others in other directions. Outer frames of the domes are eight cornered and are based on arches. Arches are usually embroidered with red stone and white marbles while green stone was used only on those on the axis. Upper and lower windows are surrounded with large beltcourses. Doorframes are made of marble and are emphasized with very large and strong beltcourses.

Starting from the tomb of Mehmed the Conqueror, tombs of several significant figures in the Ottoman history are in this mosque. Fatih's wife and mother of Sultan Bayezid the 2nd Gülbahar Valide Sultan, Ghazi Osman Pasha the "Pleven Hero" and mesnevi poet Abidin Pasha’s tombs are in this complex. 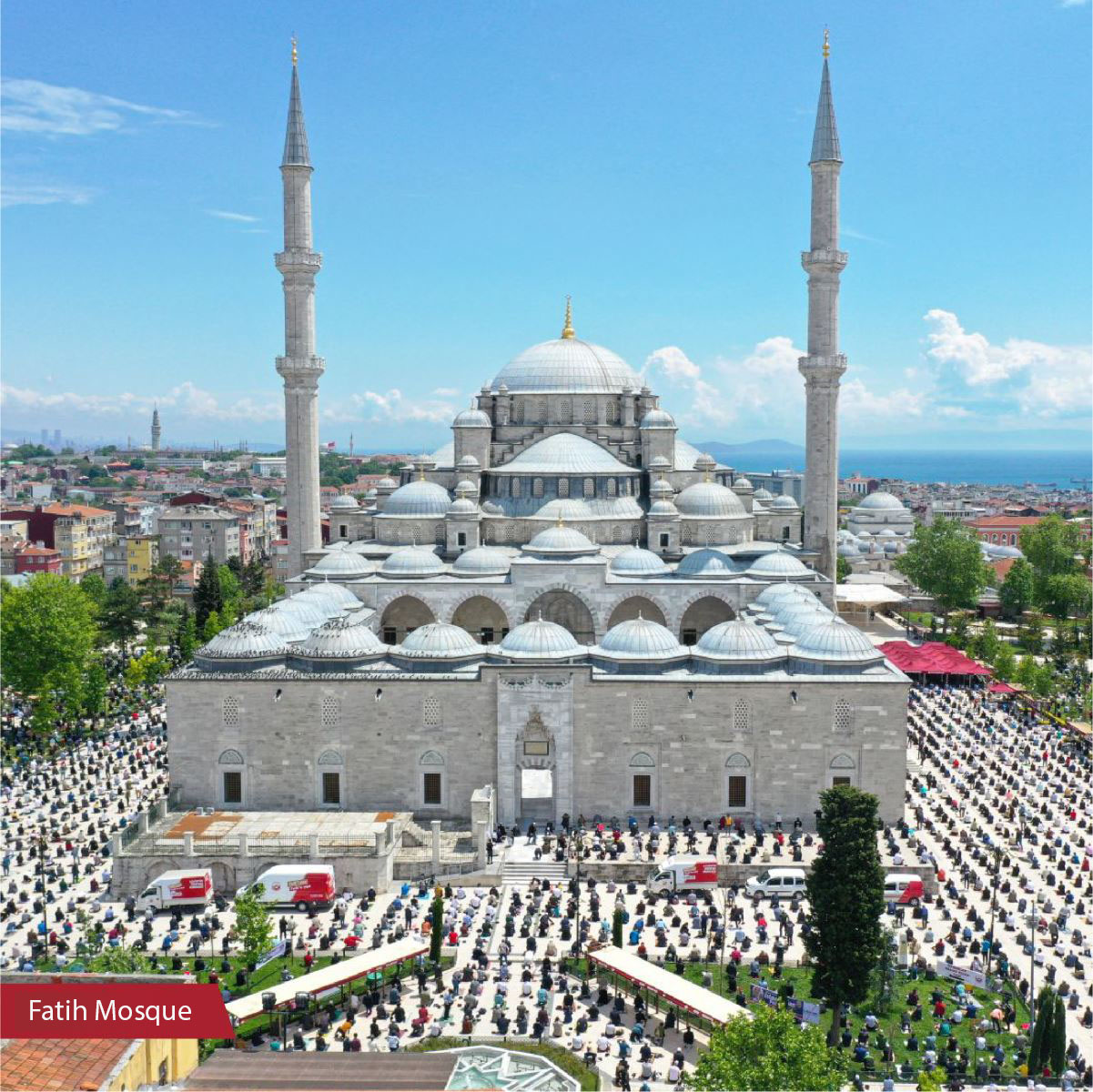 Contrary to Nuruosmaniye Mosque that preceded it dominated by the baroque style that came from the West, Lâleli Mosque and Complex has a significant place in Turkish art history as a monument with traces and basis of the classical Turkish architecture.

The mosque has square plan and six half domes circle its main dome. The sultan’s lodge is on the left side. The mosque has two minarets with one balconies each. The minaret on the left side was constructed 6 years after construction of the mosque. Inner court has 18 domes supported by 14 pillars. The fountain at this area have eight pillars. The number of windows around dome frame are 24 while the entire number of windows at the mosque are 105. Outside the mosque structure two traverses are built in the East and West sides with nine arches and at their lower side ablution faucets are placed. 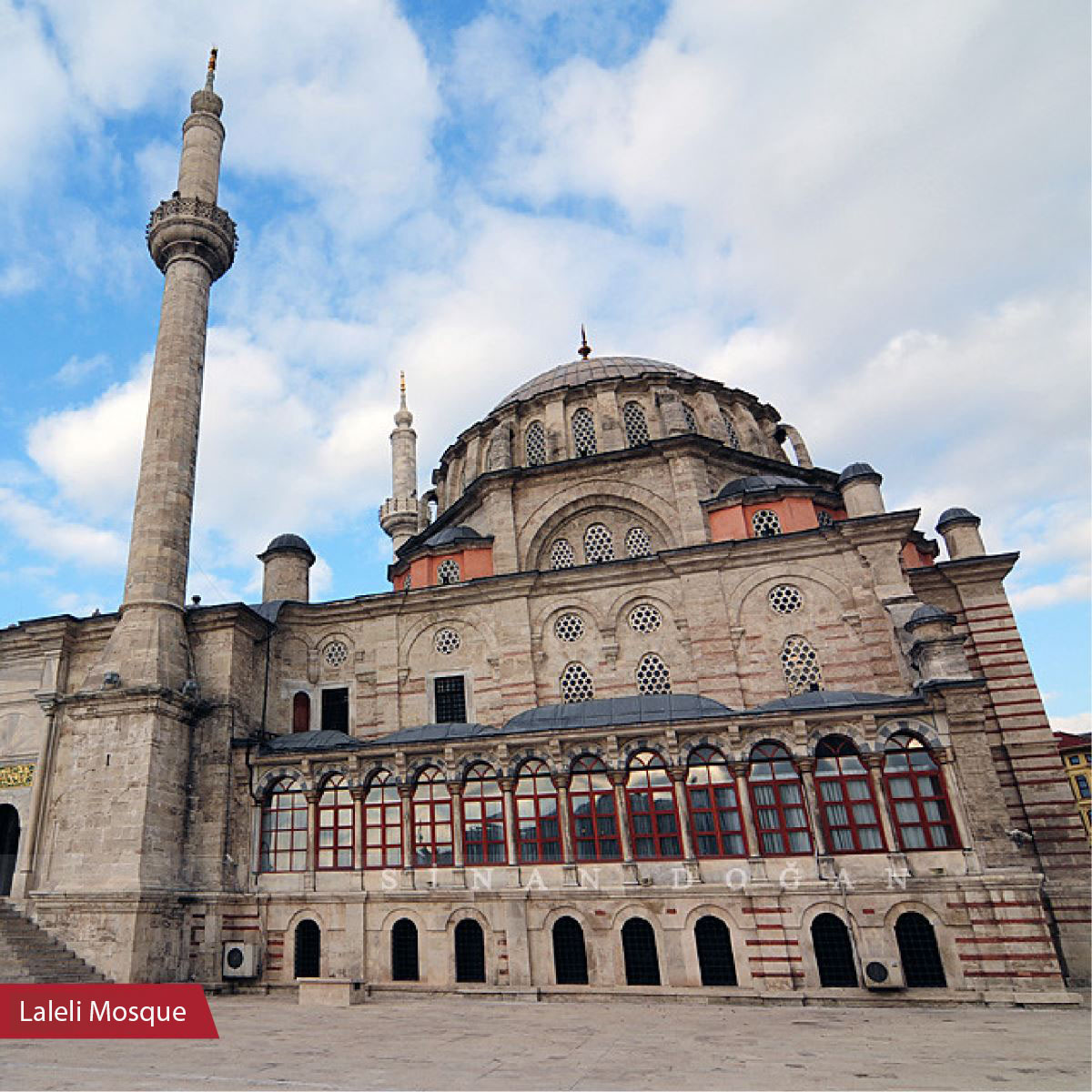 Established at Edirnekapı area of Karagümrük neighborhood right next to the city walls. Its donor was Sultan Süleyman the Lawgiver’s daughter Mihrimah Sultan. It was constructed between 1562-1565 by the Architect Sinan.

The mosque has a rectangular plan and has Muslim theological schools, sepulchers, and Turkish baths around it. Its dome has 37 m height and is based on three arches with two pillars on each side, three domes on the right and left and their lodges. The altar and pulpit are made with stonemasonry.

The praying area of the mosque has a rectangular plan. However, the main praying area at the center are separated from the annexes on both sides with two pillars on each area. These side annexes with three domes are lower than the main dome with 20.25 m diameter supported with four large arches making the dominant element of the entire structure. 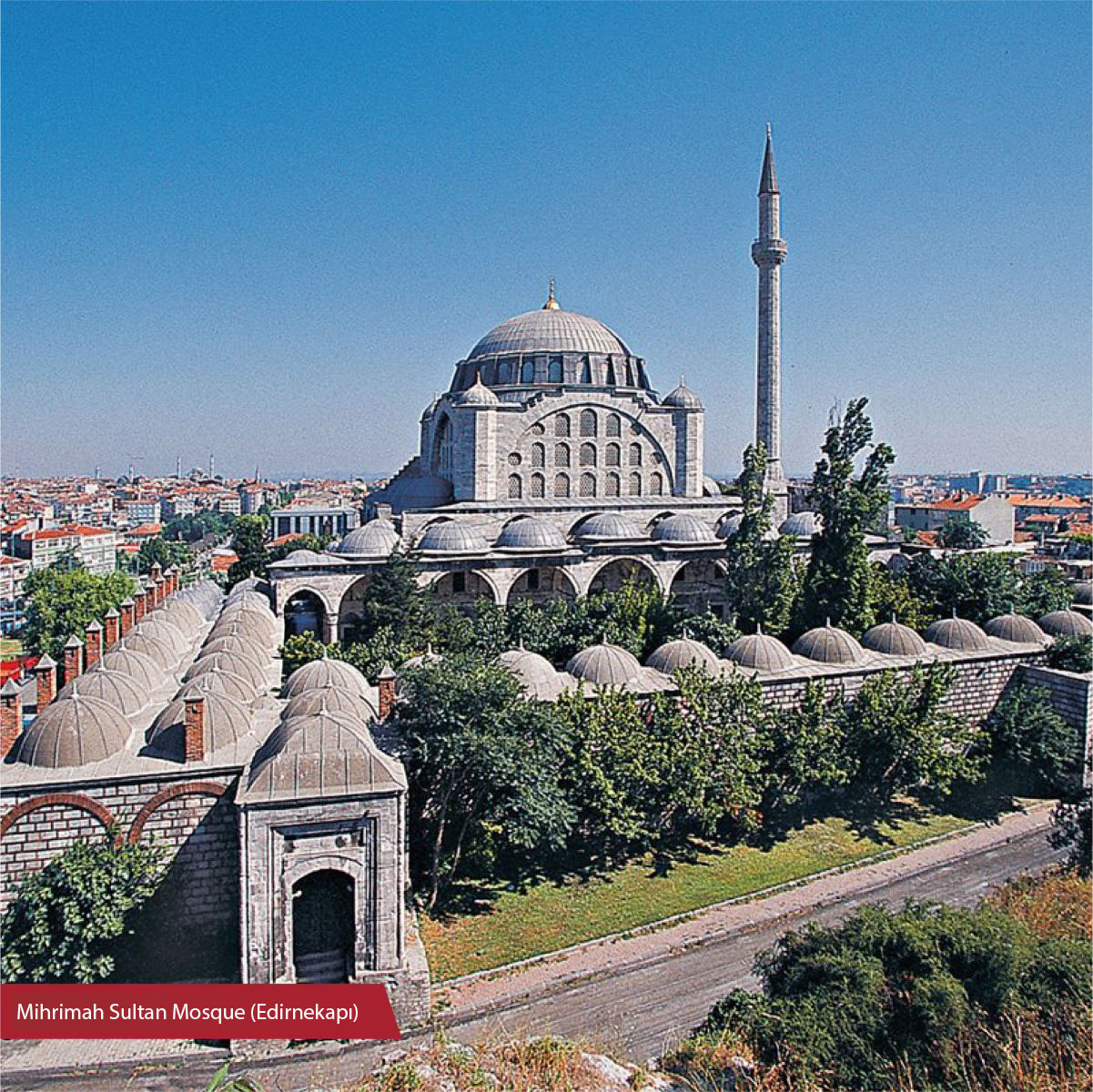 The first baroque mosque built in İstanbul. Established at Çemberlitaş neighborhood, by the entrance of the Grand Bazaar. It was built between 1748-1755. The mosque and complex that was built in a period when Westernization was emerging in architecture is considered to be a turning point in Ottoman architecture.

Although groundbreaking and construction was started during the reign of Mahmud the 1st, construction was completed and the mosque opened after his death, during the reign of his brother Osman the 3rd. Nuruosmaniye Mosque complex has the mosque, the sultan’s lodge, Muslim madrasah, library, sepulcher, fountain, soup kitchen, and stores. Qur'an Surah Al-Fath is written as a belt at the finishing of dome arches on the wall. On the dome verse 35 of Surah Nur is written: “God is the light of the skies and the earth.” Its two minarets attached to the structure with two balconies have stone cones. Stone finials instead of lead were used in the mosque for the first time. Courtyard of the mosque has a porticos and is multi-cornered. This makes the mosque one of its kind in Ottoman architecture. 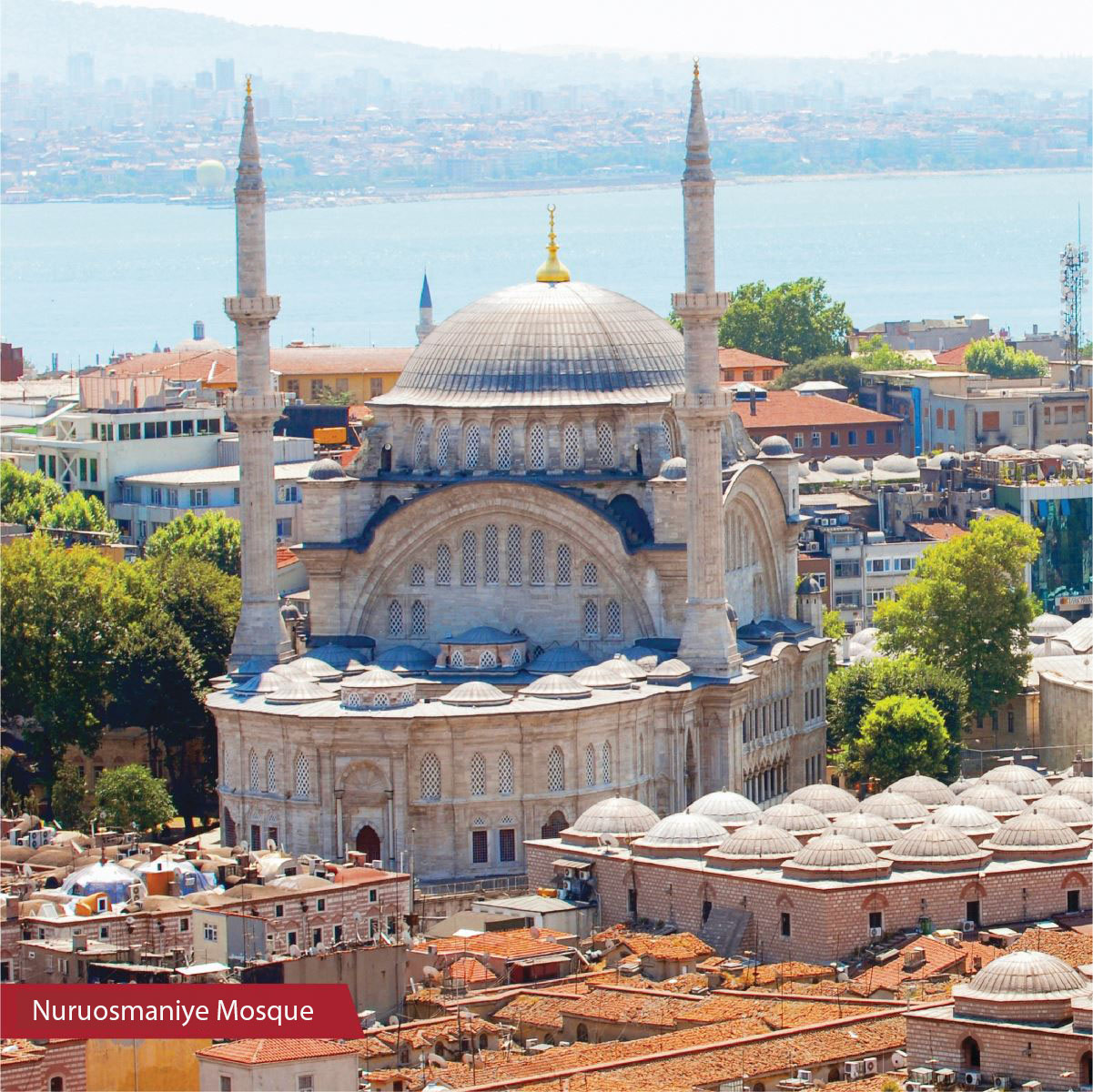 Construction ordered by wife of Sultan Mahmut the 2nd and mother of Sultan Abdülaziz, Pertevniyal Valide Sultan and completed between 1869-1871. Its plans are known to be drawn by Sarkis Balyan with contribution of Hagop Balyan. Built at Aksaray Square, the complex has mosque, school, sepulcher, sepulcher keeper’s room, library, timekeeper’s house, police station, six fountains, and seven stores. The mosque has a quite different architecture from classical mosques with its neo-gothic design. Its major groundbreaking ceremony was attended by senior government officers, theologians, and scholars. Pertevniyal Sultan followed the groundbreaking ceremony from the window of a house that has a view of the square.

Built in eclectic (mixed) style, the mosque has four large arches based on four large pillars and a single dome that is a common plan of late Ottoman mosques. Blue is the dominant color in the mosque and plant ornaments are found next to star arrangements. 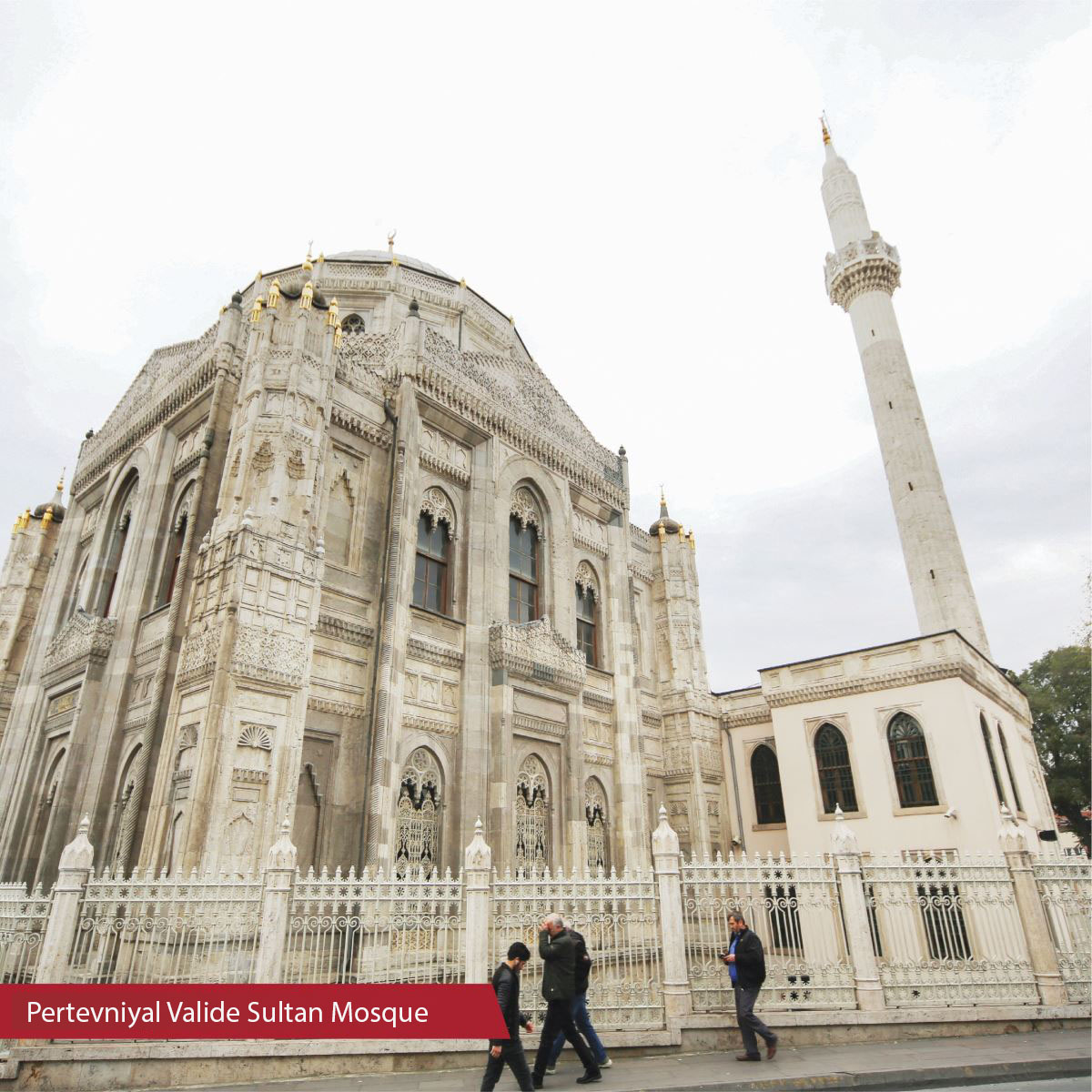 Constructed between 1609-1617 by Architect Sedefkâr Mehmed Ağa, one of the students of Architect Sinan on the order of Ottoman Sultan Ahmed the 1st. Blue İznik china are substantially used on walls of the mosque which gave the mosque the name Blue Mosque. On the walls there are 21,043 glamorous İznik China.

Sultanahmet Mosque is one of the greatest structures in İstanbul together with its complex. This complex has a mosque, madrasahs, sultan’s lodge, bazaar, stores, fountain, sepulcher, hospital, elementary school, soup kitchen, and rooms for rent.

Dimensions of the prayer area of the mosque are 64 x 72 meters. Diameter of its dome is 23.5 meters and has a 43 meter-height. Inside the mosque is lightened with over 200 colored glasses. In addition to having some traces of its neighboring the Hagia Sophia Grand Mosque (Ayasofya-i Kebir Cami-i Şerifi), traditional Islamic architecture is also visible and is accepted as the last great mosque of the classical period. 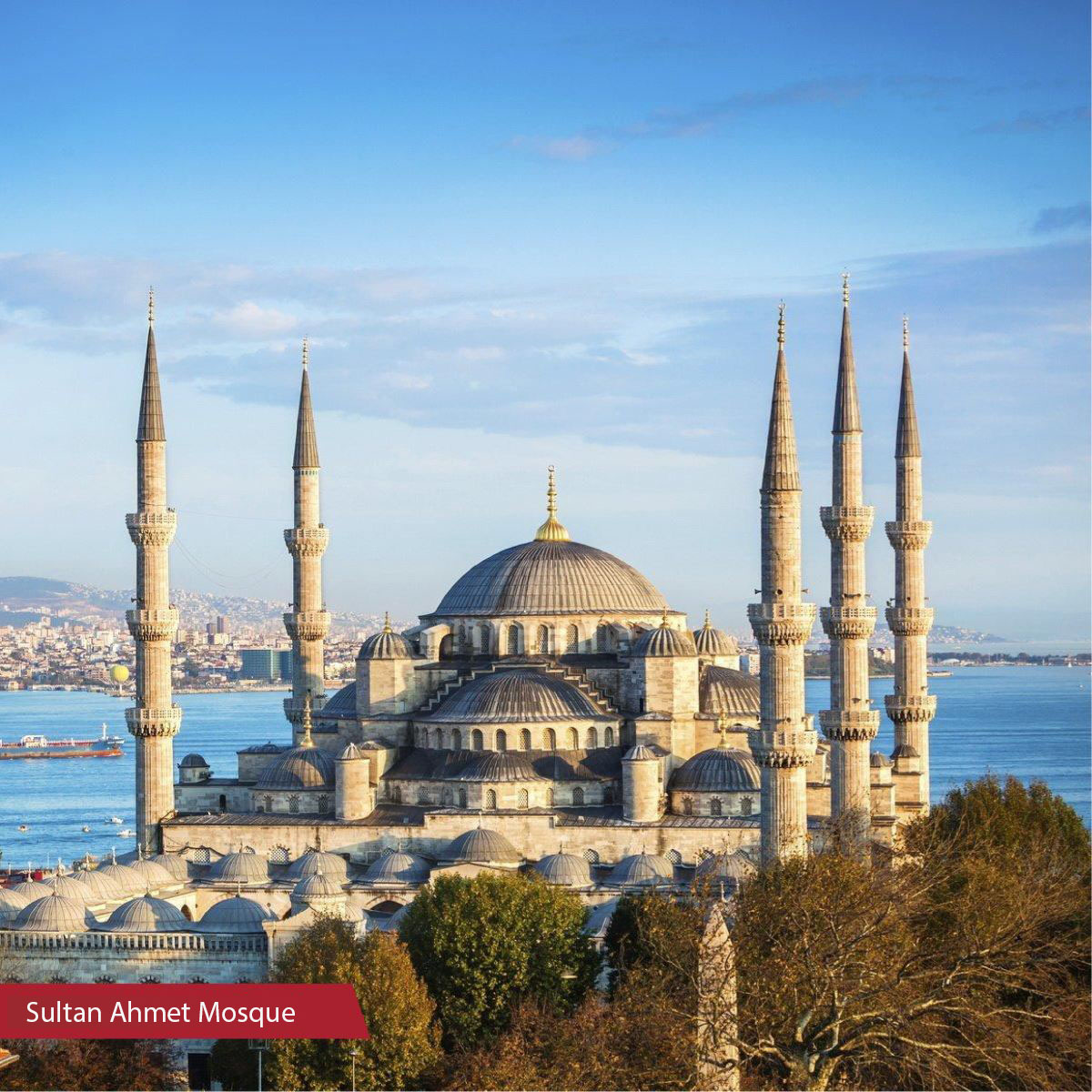 Constructed by Architect Sinan in the name of Sultan Süleyman the Lawgiver between 1551-1557. Described as a work of journeyman period of the Architect Sinan, Süleymaniye mosque was built as a part of the Süleymaniye Complex with madrasahs, library, hospital, elementary school, turkish bath, soup kitchen, burial area, and stores.

Süleymaniye Mosque is one of the most significant examples of Classical Ottoman Architecture. Standing on four elephant-feet, dome of the mosque has 53 m height and 27.5 m diameter. A rectangular-shaped fountain lies at the center of the courtyard surrounded with 28 stoas. At Mecca-side of the mosque there is a burial area with tombs of Sultan Süleyman the Lawgiver and his wife, Hürrem Sultan.

Dome of the tomb of Sultan Süleyman the Lawgiver is decorated with diamonds placed in metallic plates on the inside to create the image of sky adorned with stars.

The mosque has a plain structure in terms of decorations. Windows on the altar wall are decorated with stained glasses. Qur'an Surah Al-Fath is written on China medallions on windows at both sides of the altar while Qur'an Surah An-Nur is written at the center of the main dome. Calligrapher of the mosque is Hasan Çelebi. 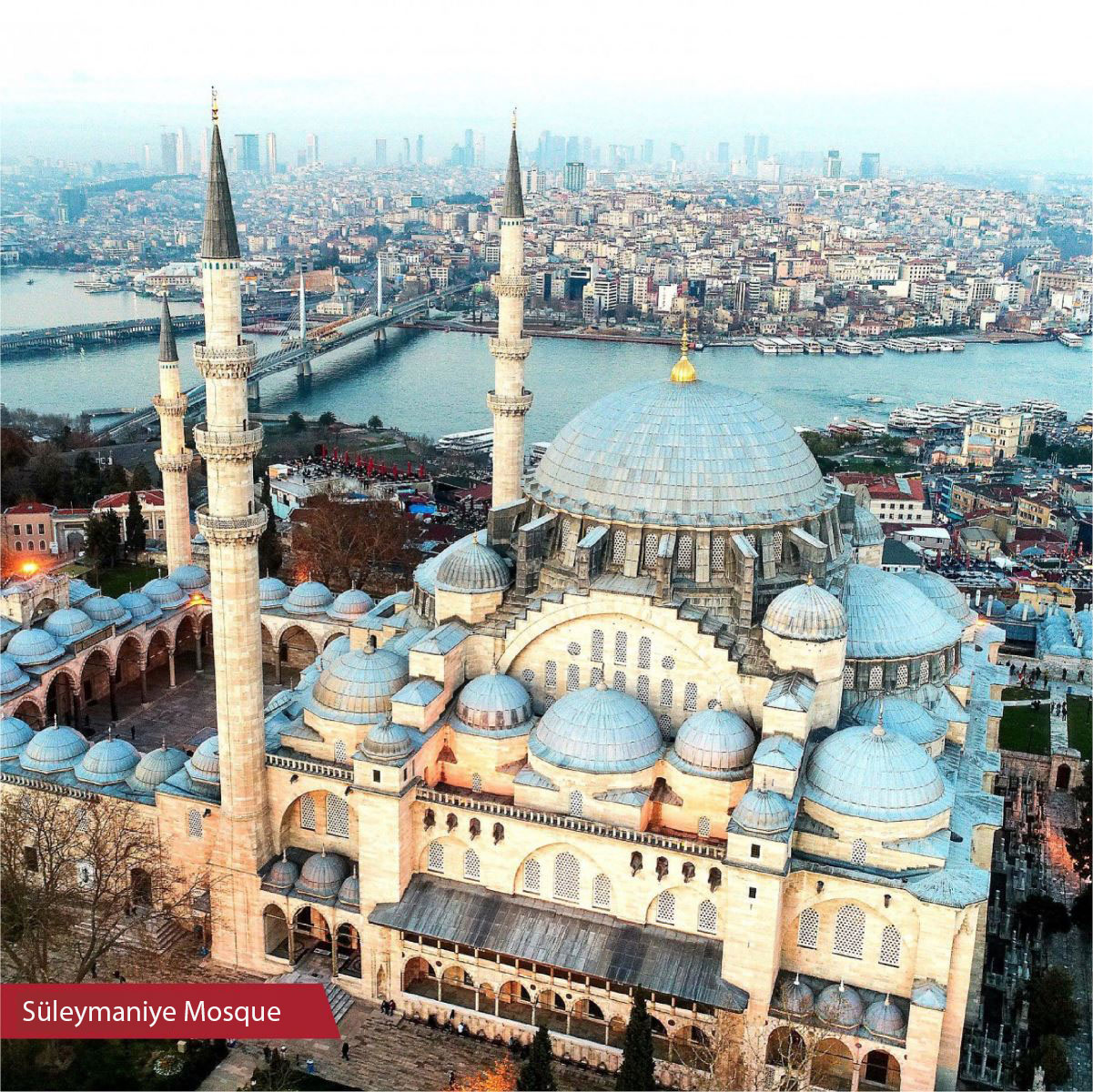 Constructed by Architect Sinan on the order of Sultan Süleyman the Lawgiver for his son Prince Mehmet who died at a young age. Described by Architect Sinan as work of his “apprentice period”. Construction of the mosque was started in 1543 and completed in 1548. Şehzade Mosque has a square plan is covered by a central dome with 18.42-meter diameter and four large half domes to complete and continue its impact. The main dome stands on 4 elephant-feet. Also there are smaller domes at four corners of the mosque. Burial area, madrasah, Islamic monastery, and tombs are at the mosque’s garden and rear street. Prince tomb is covered with colorful china. 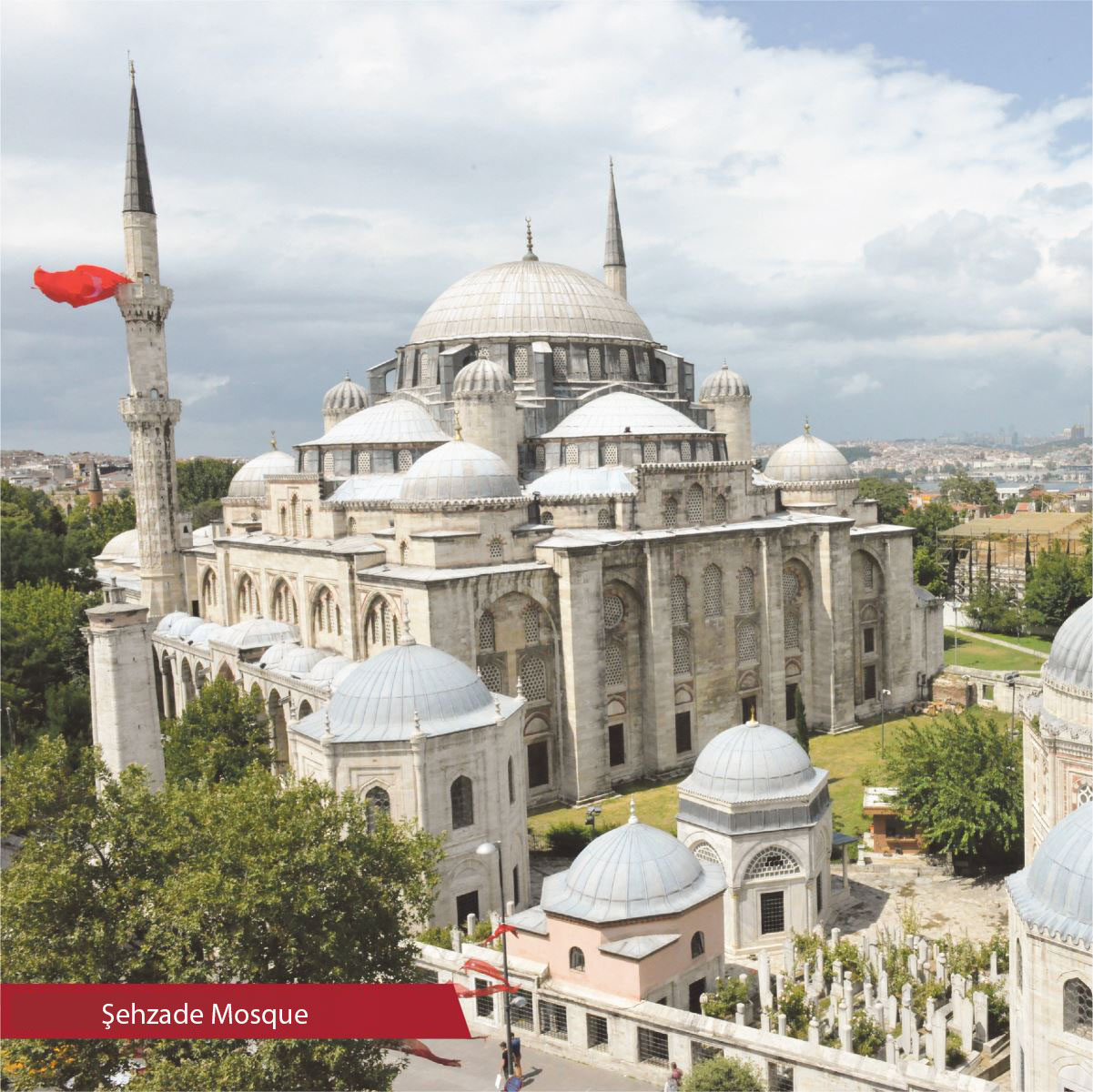 Construction of the mosque started in İstanbul in 1597 on the order of Safiye Sultan, wife of Sultan Murad the 3rd and completed in 1665 with great effort and donations of Turhan Hatice Sultan, mother of the Sultan at the time, Mehmed the 4th.

Making a significant contribution of silhouette and visual quality of the city, the Yeni Mosque is the last example of grand mosques that the Ottoman family had constructed. It is known as the mosque that was constructed in the longest time in Ottoman era Turkish architecture.

Yeni Mosque has the characteristic cloister scheme of classical Ottoman architecture. It has a centered planning. The main dome with 16.20 m. diameter extended to the sides with half domes on four sides. The main dome stands on four elephant-feet.

The Mosque has two minarets with three balconies each. The minarets rise as ten hexagons on square pedestals and on top there are lead covered cones. The minarets are constructed at the two ends of the wall of main door separating the mosque from fountain courtyard. 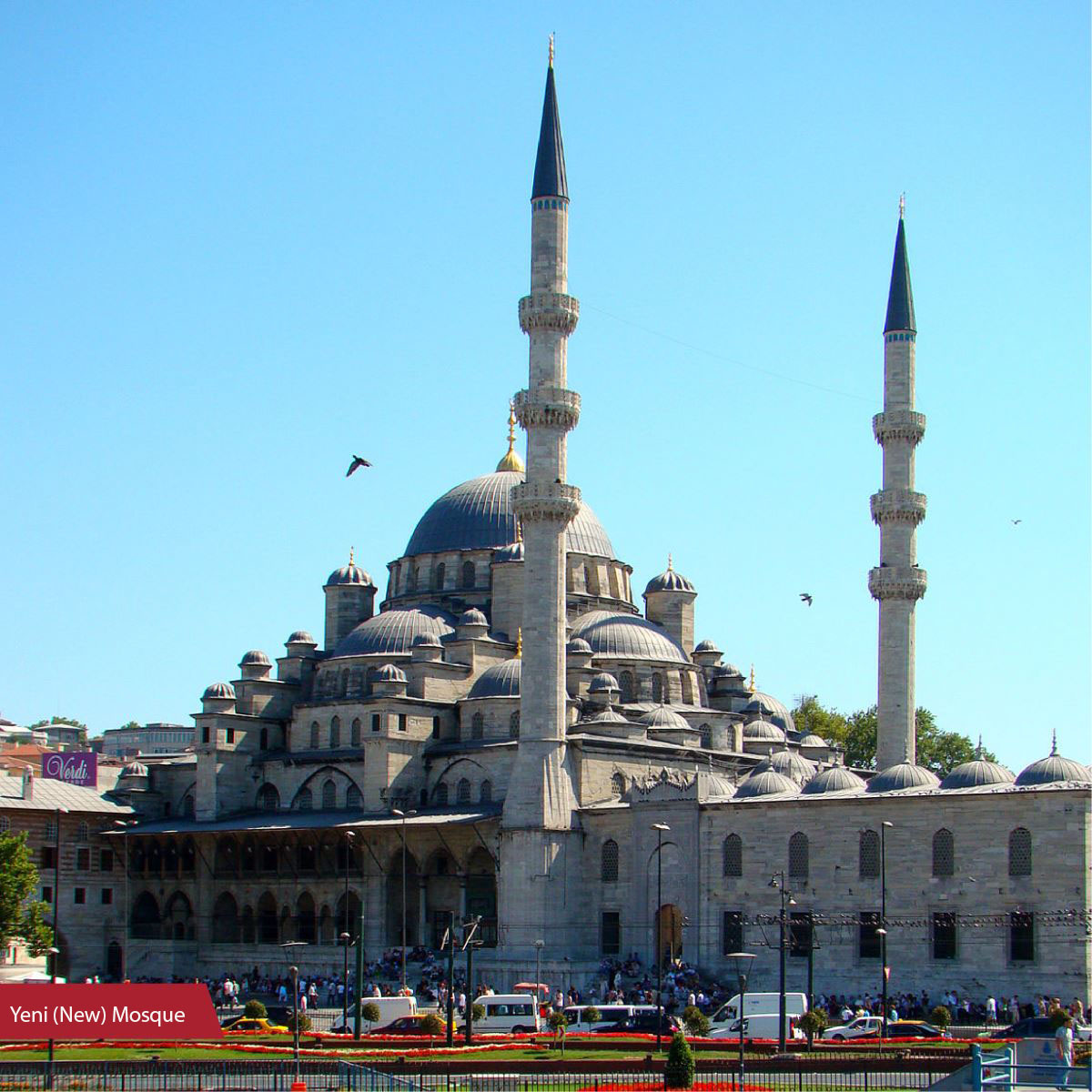