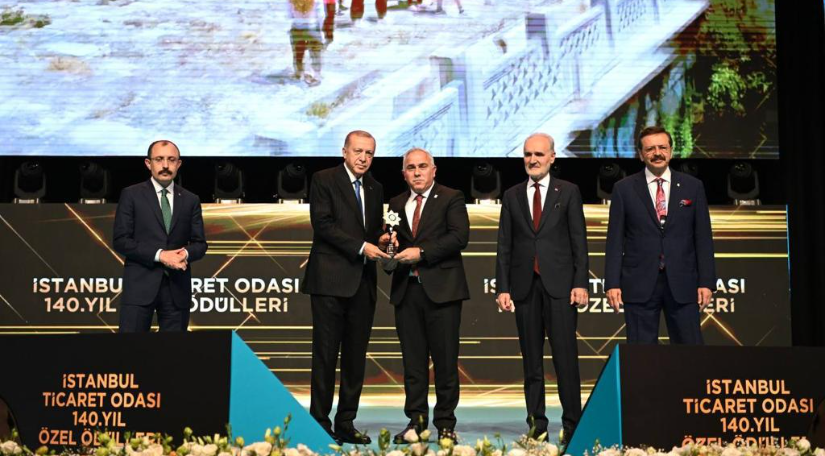 ICOC, the umbrella organization of the Istanbul business world with its 693 thousand members, celebrated its 140th anniversary with a special award ceremony. Nureddin Nebati, the Minister of Treasury and Finance, Mehmet Muş, the Minister of Trade and Rıfat Hisarcıklıoğlu, the Chairman of the Union of Chambers and Commodity Exchanges of Türkiye (TOBB) attended the award ceremony, which was held at the Haliç Congress Center with the presence of our President, Mr. Recep Tayyip Erdoğan.

In his speech at the ceremony, ICOC President Avdagiç said that as the Dersaadet Chamber of Commerce, which was established to realize the dream of Sultan Abdulhamid II for an industrialized and developed Turkey, they have made great efforts to develop the Turkish economy since then. Stating that they consider Istanbul as their center and operate in every corner of the world for Istanbul and the Turkish business world,

Avdagiç said that they believe in the necessity of recognizing and rewarding those who add value to Istanbul, and that they aim to celebrate their 140th anniversary with the 140th Anniversary Special Awards for this purpose.

AWARDS WERE PRESENTED IN 6 CATEGORIES

After the speeches, ICOC President Avdagiç presented a certificate of gratitude on behalf of the business world of Istanbul to President Erdoğan, whom he described as "a lover of Istanbul who has modernized production and trade and devoted his life to serving Istanbul".

At the ICOC 140th Anniversary Special Awards, awards were given in 6 categories: "restoration", "culture-art", "tourism", "technology", "entrepreneurship" and "transformation". The awards were presented by President Erdoğan and ICOC President Avdagiç. The award in the category of "Restoration" was given to the restoration of the Yedikule Dungeons, which brought Ottoman and Byzantine architecture together, carried out by Fatih Municipality. The award was presented to Fatih Mayor Ergün Turan by our President, Mr. Recep Tayyip Erdoğan.