The chess players who were successful in the 2022 International İstanbul Open Chess Tournament hosted by Fatih Municipality were granted their awards at the ceremony. 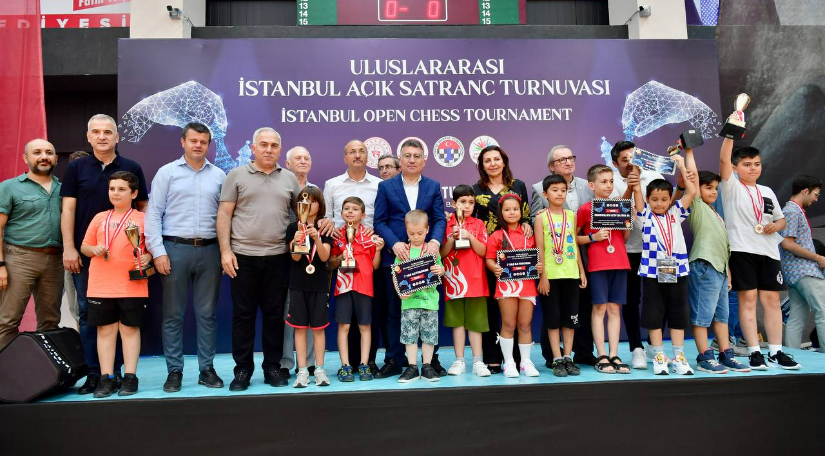 In the tournament organized by Fatih Municipality together with the Turkish Chess Federation, a total of 750 chess players from 21 countries and 49 provinces, 46 of which were titled, competed fiercely between 8 and 14 August. Abdullah Güler, an Ak Party Deputy for Konya, Mehmet Ergün Turan, the Mayor of Fatih, Gülkız Tulay, the President of the Turkish Chess Federation, Seyda Dursun, Fatih Provincial Director of Youth and Sports, attended the award ceremony held at Atatürk Çağdaş Yaşam Sports Hall where the tournament took place.

MAYOR TURAN: "THOSE WHO ATTENDED FOR THE FIRST TIME HAD A GOOD EXPERIENCE”

Speaking at the award ceremony, Mehmet Ergün Turan, the Mayor of Fatih, said that he was happy to host a record number of participants in Fatih and said, “I congratulate all our chess players who have been ranked the highest as a result of the competitions held in 17 categories. I think this tournament gave them a good experience, especially for our young players who participated for the first time. Hopefully, we will hold our tournament again in Fatih next year in a larger venue and with more participants.”

Gülkız Tulay, the President of Turkish Chess Federation, stated that as the federation, they attach great importance to the continuation of international open tournaments and said, “It was the most precious award for me to get the promise, from our Mayor, for the tournament next year. I hope this tournament will continue to grow further and continue," she said.

Awards Granted to Winners in 13 Categories

At the ceremony, İsmet Arvit, who has been holding the title of IA for nearly 40 years and has served in many international tournaments such as the Chess Olympiad, was awarded the "2022 Referee Award" by the World Chess Federation (FIDE) Referee Board. Medals, trophies and and a total of 100 thousand TL cash prize were awarded to the chess players who were successful in the tournament in the following categories: 7, 8, 10 and 14 ages and under 12 and 18 age groups, visually impaired, veteran, most successful female player, local player, unrated, 2000-2200 rated and the most successful Turkish player.