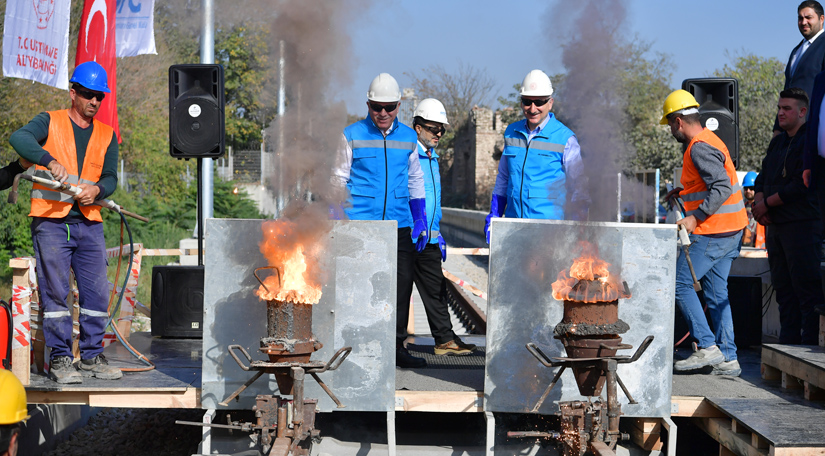 Kazlıçeşme-Sirkeci Rail System Project's first rail welding was made with a ceremony attended by Adil Karaismailoğlu, Minister of Transport and Infrastructure, and Mehmet Ergün Turan, Mayor of Fatih Municipality. In his speech at the ceremony, Adil Karaismailoğlu, Minister of Transport and Infrastructure, underlined that they launched a very important stage with the welding of the first rail in the Kazlıçeşme-Sirkeci Rail system project, which is not only an urban rail system project but also a pedestrian-oriented new generation transportation project.

WE WILL PROVIDE A NEXT GENERATION TRANSPORTATION PROJECT

Giving information about the project, Karaismailoğlu has stated that the Sirkeci-Kazlıçeşme line, which is 8.3 kilometers long and has 8 stations, is a rail system project, and that they will offer a new generation transportation project with a hybrid character with new opportunities such as sociocultural, tourism, economic, ecological, recreation, sports, sightseeing, cycling, scooters as well as transportation needs to the residents of Istanbul with 8.5 kilometers of bicycle paths, 8.5 kilometers of pedestrian paths, 10 thousand 120 square meters of squares and recreation areas, 6 thousand square meters of indoor social cultural area, 74 thousand square meters of Next Generation Green Area, 3 pedestrian overpasses, 22 road and pedestrian underpasses, 4 registered stations in Yedikule, Kocamustafapasa, Yenikapı and Kumkapı, 2 stations to be renovated in Sirkeci and Cankurtaran, and 2 new stations in Kazlıçeşme and Cerrahpaşa. Karaismailoğlu also stated: “In addition, the intersection connecting Samatya and Cerrahpaşa coastal road and Samatya and Cerrahpaşa hospitals is being modernized, and the underpass will be made suitable for transportation by increasing its width. We will quickly put this intersection and the Samatya underpass into the service of Istanbulites and Fatih residents at the beginning of the New Year. With the new railway line to be built in Sirkeci Port Area, transportation and coordination will be provided between Sirkeci and Haydarpaşa ports. This will be a monumental work that will be a permanent part of the lives of Istanbulites. We have achieved 45 percent physical progress in the project so far. Restoration works at the registered stations, catenary foundation concrete and pole installations, drainage channel concrete works, sub-ballast material laying, rail and traverse laying works are proceeding at full speed.”

WE HAVE TAKEN ISTANBUL TO A COMPLETELY DIFFERENT LEVEL BEYOND IMAGINATION

Emphasizing that they have implemented mega projects one by one to make Istanbul one of the cities with the most advanced transportation infrastructure in Europe and the world, Karaismailoğlu stated that they have taken Istanbul to a completely different level beyond imagination with mega projects such as Marmaray, Eurasia Tunnel, Istanbul Airport, Yavuz Sultan Selim Bridge and Northern Marmara Motorway, Osmangazi Bridge and Istanbul-İzmir Motorway, Istanbul-Ankara HST Line. In addition to all these, Karaismailoğlu noted that they have realized the world's most unique and advanced urban rail system projects in Istanbul one by one and said that they have equipped Istanbul with modern rail system networks from one end to the other.

WE AIM TO REDUCE CARBON EMISSIONS WITH NEXT GENERATION METHODS

Expressing that they will continue their efforts to encourage urban mobility in Istanbul and direct people to active mobility, public transportation and smart transportation solutions, Karaismailoğlu stated as follows: “As the Ministry, we are already carrying out all our projects and investments with environmental sensitivity in the focus of mobility, logistics and digitalization, taking into account the developing trends in the world. Our holistic development-oriented vision has many common denominators with the European Union's key approaches, such as the European Green Deal, the Paris Climate Agreement and the European Climate Law. In addition to the expansion of electric urban rail systems, we aim to reduce carbon emissions with next generation methods within the framework of carbon emission reduction policies. We are creating an effective, efficient and solution-oriented micro-mobility system. We create the general concept for the expansion of public transportation and bicycle use in cities and pedestrianization projects, and we attach great importance to the development of this concept. Our Kazlıçeşme-Sirkeci Urban Transportation and Recreation Oriented Transformation Project is one of the best examples for this.

THE FIRST RAIL IS WELDED

Fatih Mayor M. Ergün Turan stated that the area, which has been closed for years, will be made accessible to the public thanks to the project and said, "This project is a very important transportation project for Fatih and Istanbul. It is a very important project that was previously absent in the memory of the city and will be part of the memory of the city." After the speeches, Adil Karaismailoğlu, Minister of Transport and Infrastructure, and Fatih Mayor Mehmet Ergün Turan welded the first rail in the project site.